On the 24 July 2015, the Equality and Human Rights Commission announced the shocking results of their new research, showing around 54,000 new mothers may be forced out of their jobs in Britain each year.

The most common scenario is where a woman goes on maternity leave and when organising her return to work, is told that her job has “disappeared” and she is redundant.  It is difficult for these women to find out what has happened to their job, as they have often been on maternity leave, with no contact with their employer, or encouragement to come in for Keeping in Touch days. In many cases, we discover that their job has been given to someone else and there is no real redundancy.

Employers fail to appreciate that employees on maternity leave are entitled to be consulted about any planned changes in the workplace that affect their job. Also, if there is a redundancy situation, any possible suitable alternative employment should be offered to women on maternity leave, over and above anyone else at risk of redundancy.

What is interesting is that this survey also included the views of employers. Their response was at odds with the 3,200 women interviewed.  84% of employers believe that supporting pregnant workers and those on maternity leave is in the interests of their organisations. Clearly this commendable sentiment is not being played out in the workplace.

The Commissions aim in publicising this research is to reduce Pregnancy and Maternity Discrimination. The Commission is providing practical advice and a practice toolkit with a step-by-step guide for employers on managing pregnancy and maternity. This is to be applauded.  However, the real barrier to justice has been the introduction of Tribunal fees for the first time in July 2013.

An employee bringing a discrimination claim now has to pay £1200 to have their case heard at a time when she will have had reduced earnings. Most women only receive Statutory Maternity Pay for the majority of their leave at £139.58 a week and many may find themselves out of work due to being unfairly dismissed.

The recent tribunal statistics show that the number of women lodging pregnancy discrimination claims has fallen by 40%, since the Government introduced fees in the 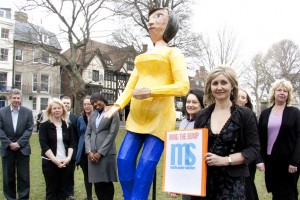 Tribunal. Sex Discrimination claims have fallen by 82% since July 2013.

Access to justice is a Human Right. If employers ignore the law that protects pregnant women and those on maternity leave then the Tribunal system should be accessible so that these women can enforce their rights.

We should all question what sort of society we want to live in. Do we want to live in a society that penalises women in the workplace for having a family? Or do we want to ensure that our workplaces accommodate work life balance and family life so that women can also participate? As it stands female talent is being wasted – and this needs to be urgently addressed.

This is why we are launching a new Pregnancy and Maternity Discrimination Campaign this October for both employees and employers  – ‘Mind the Bump 2015’.